This article is being posted here as well as in parallel as a guest post at Maple Leaf Hotstove. FYI, for those who read my last post – as promised – this article is a succinct summary of my draft analysis ‘report’ shared earlier.

The hockey analytics community has looked at many aspects when projecting a player’s performance over their career: prior league, prior scoring rate, performance of players with similar characteristics, size, and date of birth – amongst others. One example of such work was an article from earlier this year by ‘moneypuck’ at NHLnumbers.com.

Moneypuck’s analysis derives its foundation from an excellent study by Michael Shuckers in 2011, where Shuckers was one of the first to create a standardized view of ‘draft pick value’. The quality of Schuckers’ analysis drove many other authors to do work that followed suit, building on his approach. However, in his paper, Michael chose to define ‘draft pick value’ entirely based on likelihood to play >200 games in the league. Although that is a reasonable metric – and few would argue that reaching 200 NHL games means a draft pick was NOT successful – there are limits to using only a single metric to define ‘success’.

How ‘successful’ a pick was, and the ensuing value of a draft pick, is highly sensitive to how we choose to define success. Is a pick successful after 40 games, 80, or 200? Are they successful after 30 career points, or 100? How about their points per game? Or their total career points? How would our definition of ‘success’ change on each of these metrics if they are a forward or a defenseman?

As you can imagine – this isn’t a simple thing to answer. Earlier in 2015, Stephen Burtch did some interesting work down this path, where he combined expected GP with expected Pts/Gm to create a new draft pick value figure – which was a big step in the right direction. However, even Pts/Gm has its gaps, given that it only considers players still in the league. As time goes on, the least successful players will leave the league sooner, increasing the average Pts/Gm of those remaining. In a perfect world, we would want a metric that has already been adjusted for a player’s likelihood to succeed in the league, rather than one based on his success if he can stay in the league. (Though – to be fair – Burtch does seek to address this point through multiplying probability of reaching 200 games by expected Pts/Gm).

In order to address these points, I have taken a very detailed look at long term player performance and development based on draft round, incorporating a wide range of metrics into my analysis. Specifically, I have reviewed the five years of players drafted from 2000-2004, as well as the ensuing 9-13 years of NHL season data.

Arguably the biggest factor in whether or not analysis is put into practice is if a team’s front office and coaching staff truly understand it, and believe the results of the analysis enough to buy-in to it – which will often come down to the method by which that analysis is communicated. As such, I have tried to simplify the statistical methodology involved in this work, and display the output visually in a way that is easily understood and hopefully very accessible to stats and non-stats folks alike.

(As a note – this article focuses strictly on metrics related to player performance and development. However, a natural follow on to this is then connecting that information to draft pick value, as mentioned, and after that, how successful teams have been in drafting – both of which are covered in my full report, originally posted here).

What I Hope To Answer

The objective of this analysis is to investigate ‘typical’ player performance and development trajectory after being drafted in a given round, in order to answer the following three questions:

Analysis of Long Term Player Performance and Development by Draft Round

I have split out the upcoming sections of analysis by each type of metric used. I will then revisit the three questions above directly in the final section on conclusions.

As Michael Shuckers showed very clearly – players drafted in the first 2-3 rounds are much more likely to appear in the NHL; however, the likelihood of a playing one or more full seasons diminishes substantially after the first round 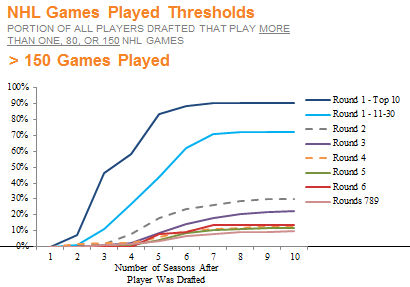 In terms of player development, this data suggests that: 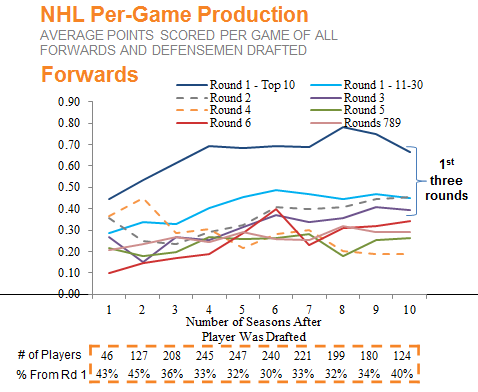 Defensemen naturally display a much more narrow distribution of results, accounting for the fact that a ‘strong’ defenseman will not always play a significant point-scoring role 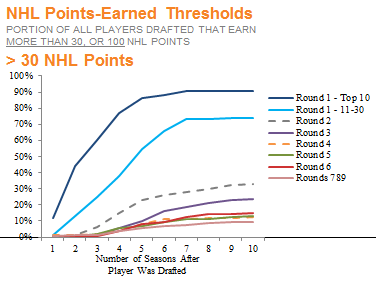 … However, players drafted in the third round fall behind in terms of likelihood to pass the 100-point career threshold 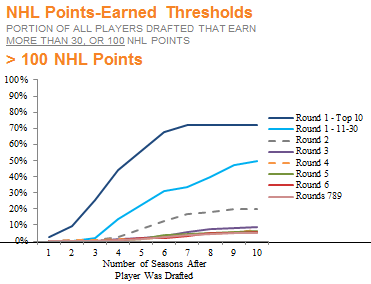 The ideal metric to compare performance by round must be adjusted for players with limited NHL careers – which brings me to Lifetime Production, or Cumulative Career Points Scored

(Note – Forwards and Defensemen are shown on different scales)

Having now walked through each chart and its meaning, I want to summarize my findings from above. To do so, let’s revisit the original list of three questions:

If a player is drafted in round X, and is ultimately able to make the NHL, by when should they be expected to be a contributing NHL player?

How well does the typical player perform over the course of his career (on various metrics) after being selected in a given round?

Within the first round, how do the top 10 overall picks perform versus those taken 11th-30th?

The long term performance expected of a player based on their draft round is something that is highly relevant to teams throughout their decisions in trades, on draft day, and in supporting a player’s development over his career. Hopefully you have found this analysis to be interesting, and found that the work was also able to build upon what is already out there by expanding the range of metrics that we look at. As mentioned, the PDF I linked to above also begins to apply this to both a revised (and straightforward) metric of draft pick value, as well as to answer the question of ‘Which teams were the most successful?’ in the draft years studied. Keep an eye out for ‘Part 2’ of this article – where I apply the data above to the trades done by the Leafs on Draft Day last summer, in order to see if Hunter, Dubas and friends were winners or losers in their exciting deals…

This article is presented by OAK Coasters, a website where you can by beautifully crafted, hand made One of A Kind (OAK) coasters that make the perfect gift. Check them out at OAKCoasters.com.